Abracadabra! When the Magician tarot card appears in your reading, your higher self is ready to help you manifest your greatest desires.

The Magician is a very high-energy Major Arcana card and reveals how your wishes can be realized through determination and willpower.

He allows you to translate ideas and untapped talent into action.

Before diving deeper into the Magician tarot card meaning and its most important card combinations, below you can find a quick overview of the facts and most important words represented by this Major Arcana card.

To fully understand the Magician tarot card meaning, we will first take a look at the illustration, its’ colors, and symbolism.

The Magician stands with one hand pointed to the sky, while the other hand points to the ground. This position reflects his connection between the spiritual and the material realms, which the Magician uses to manifest his goals in the physical world.

He has the ability to bridge the gap between heaven and earth and as such, he is capable of converting energy into matter.

His white robe symbolizes purity, while his red cloak represents experience and knowledge.

On the table in front of him, the Magician wields all the suits of the tarot: a cup, pentacle, a sword, and a wand.

They signify the classic elements of earth, water, air, and fire, and are connected by the Magician. This indicates that the Magician has all the tools he needs to translate his ideas into reality.

The infinity sign on his head and the snake around his waist indicate that he has access to unlimited potential. Furthermore, the flowers on the foreground show the culture of aspiration.

The Magician tarot card reveals how your wishes and desires can be realized through determination and willpower. When this card shows up in your reading, you can be assured that you have the drive to make your dreams happen.

It might be in your new job, a new business venture, or a new love. This is the time for positive changes in your life and for you to take action.

Establish a clear vision of what you want and why. If you’re clear about the “what and “, harness some of the Magician’s resources to manifest your desires: the spiritual (fire), physical (earth), mental (air), and emotional (water).

If you combine these with the energy of the spiritual and earthly realms, the consequences of your actions will be successful and positive. Trust your own intelligence and realize you have the wisdom to make the right choices.

Just remember that you are powerful and if you create your inner world, the outer will follow. Yet, you have to focus and concentrate on achieving your dream. Get rid of any discretions and make a detailed plan to stay on track.

The Magician reversed simply means that the card appears to be upside down from your angle of vision, just like the image below.

In this paragraph, we will talk a bit more about what it means if you’ve pulled the Magician tarot card in the reversed position.

When the Magician tarot card is reversed in a reading, its great power is definitely something to be wary of. As the Magician is a master of illusion, you should be aware of his tricks and traps that are designed to confuse and manipulate you.

That’s why the card may warn you about someone who pretends to have your best interest, but behind that, there may be an intention to manipulate for selfish gain.

The M does not only relate to a person within your inner circle. He can also represent your current state of emotions and a message from your higher self.

It may mean that your end goal is out of alignment with your highest good or that you’re hesitant about making the necessary changes.

And although you have the wisdom, knowledge, and skills, you’re still uncertain about them and don’t use them to achieve your goals. As a result, you don’t maximize real potential yet.

Illusion is the first of all pleasures.

You have to consider what is stopping you from using this knowledge and skills? What are you afraid of? You have to make a shift in what you’re thinking about your current circumstances and your power over them.

Throw away those negative, self-limiting thoughts and gain a positive, empowered, and self-confident mindset. Do this and take care of what you intend to manifest, the universe will come with a plan. Again, just create your inner world, and the outer will follow!

The Magician tarot card can mean great things in a money and career reading–if you play your cards right. Because he is linked to creation, this card is especially powerful when questions are focused on launching a new business or inventing something.

Like magic, opportunities to make money, invest or climb the career ladder will present. Meditation can help you put yourself in the correct alignment to manifest the perfect opportunities.

Finding a mentor is also a good idea since having a guide can help you avoid mistakes that those who come before you already made.

Is the Magician a positive tarot card for love? This is a question asked by many of those who pull this card during a love reading.

Because the Magician tarot card represents someone smooth and charming, he or she usually waltz in and sweeps you off of your feet.

In true magical fashion, this is a whirlwind romance that feels like a fairy tale. If it hasn’t happened yet, it soon will. Will this relationship stand the test of time–well that depends.

The Magician tarot card sometimes represents a manipulator, someone who uses their personality and charisma to dupe those who fall under his spell. What does your intuition say?

Look to the cards around the Magician to determine his true intentions. Regardless, this connection will be one that is life-changing.

The Magician’s focus is on creation and improvement also in health matters. If you have been ill or working through emotional/physical difficulties, a significant change may happen soon.

A solution won’t just fall out of the sky, but by being resourceful and taking advantage of any help you have available, you’ll be able to heal any ongoing physical problem.

When it comes to spiritual practices, the Magician tarot card represents connecting to consciousness and embracing your own power.

Although advice from others is needed at times, our inner guidance system already knows what is in our best interest. We just need to be still enough to listen.

The Magician in a Yes or No Question

Yes, yes, yes. If you want it, it is yours–no doubt, but are you willing to think outside the box to get your hands on it?

The Magician is a positive card to pull, especially in ‘yes or no’ readings. Just make sure that you’re ready to dive into the process to get the things that you truly desire.

The Magician Tarot Card and Astrology

The Magician tarot card is linked to the planet Mercury, ruler of the Zodiac signs Virgo (Earth) and Gemini (Air).

Just like the Magician, Virgos throw themselves into their creativity as much as their other passions. Geminis on the other hand are fast, witty, and super into communications.

In alchemy, Mercury’s form as quicksilver is also associated with transformation or the fifth element of ether. This element is also symbolized by the snake that is wrapped around the Magician’s waist.

The Magician Tarot Card and Numerology

The Magician tarot card is numbered one, the power of the mind, creativity, and attraction. Where does manifestation begin? It begins with one.

Being of one mind about a subject rather than divided. Singular focus. It is an individual act.

One is the starting point, the first number to be defined. It is the definition and formation given to open thought (zero).

The Magician is ready to usher in a new lease on life. Below you can find the most important card combinations of the Magician tarot card.

His connection with other cards says a great deal about what your future holds.

The Magician and the Lovers or Two of Cups

When these two link up, a soulmate is in your midst or preparing to appear. If the Lovers and the Magician tarot card fall together, there is no confusion about whether he or she is ‘the one.’

If it’s the Two of Cups that appeared, your new lover won’t be someone new at all, but a friend you already know well. It seems that you have finally found Prince (or Princess) charming.

Already married or committed? A new season of love is soon to begin. Things will be positive all the way around.

The Magician and the King of Wands

Have you been considering a stint in sales? If not, you should! This duo predicts a knack for closing the deal and suggests a career change into the sales field if that’s not your current area.

If you already pushing products or services, get ready for a record year! The Magician and the King of Wands predict success in every area, especially business and finances.

The Magician and the Six of Swords

A move is on the horizon and it will be all for the best, even if you’re afraid or not too keen on leaving people, places, and things behind.

This could be a physical move, a career change, or a shift into a new dimension, but make no mistake–change is coming.

This card combination with the Six of Swords tells you that by embracing it and not looking back, you’ll avoid unnecessary suffering.

Although I write all the descriptions based on the Rider-Waite Tarot deck, it doesn’t mean that I use other decks too. Below I added some of my favorite Magician tarot cards.

As a recap, I have added the answers to the most frequently asked questions about the Magician tarot card meaning. If your question isn’t answered after reading this article, just send a message or leave a comment below.

What does the Magician mean in Tarot?

The Magician tarot card reveals how your wishes and desires can be realized through determination and willpower. When this card shows up in your reading, it’s a sign that you have everything you need to make your dreams happen.

The Magician tarot card represents the planet Mercury (communication and travel). This planet is the ruler of the zodiac signs Virgo (Earth) and Gemini (Air).

What is the Love Meaning of the Magician Tarot Card?

Is the Magician a positive tarot card for love? This is a question asked by many of those who pull the Magician during a love reading. Because the magician impersonates someone smooth and charming, he or she usually waltz in and sweeps you off of your feet, and a whirlwind romance that feels like a fairy tale is born. Will this relationship stand the test of time? Well, that depends.

The Magician Tarot Card in a reading

Just remember that this card tells you that with some determination and willpower, magic will happen! Abracadabra!

I would love to hear about spot-on readings! Did this meaning make sense to you?

Previous Post: « 12 Best Love Tarot Cards for Good Fortune in a Love Reading
Next Post: Who is Archangel Uriel? The Angel of Truth » 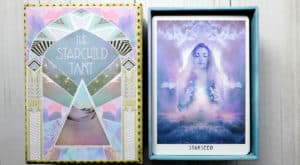 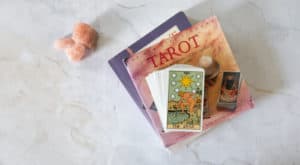 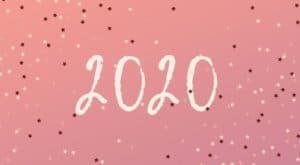 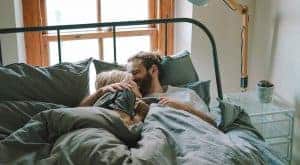 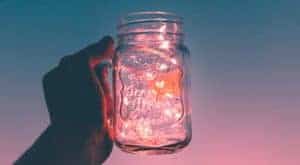