The Psychic Tarot Oracle Deck is a 65-card deck created by John Holland and published by Hay House. It’s technically an Oracle deck but with a touch of the Tarot system, using traditional themes in a new way. I like how this oracle deck uses a whole load of different spiritual tools in order to guide us in life.

Let’s look at the Psychic Tarot Oracle deck and why it might be the best oracle deck for you!

What Is An Oracle Deck?

Firstly, let’s make the distinction between oracle decks and Tarot decks. Most Tarot decks are pretty similar, with the 78 cards all having specific, traditional meanings. However, oracle decks are much more diverse. They don’t follow any rules and can contain anything that the creator wishes the deck to contain!

This means that there are so many different oracle decks out there, and there definitely be one that is perfect for you and what you need right now.

What Is the Psychic Tarot Oracle Deck?

The Psychic Tarot Oracle Deck aims to use Tarot and intuition in order for you to develop your psychic abilities. Using this deck will allow you to open up to hidden, ancient wisdom and grow spiritually.

So, how is the Psychic Tarot Oracle deck different from the classical Tarot? Firstly, a lot of cards are renamed. Also, there are no court cards. Instead, John Holland has added in Chakra cards.

The deck, like Tarot, is divided into major and minor arcana with the addition of Chakra cards.

However, instead of traditional suits of Wands, Cups, Swords, and Pentacles, the minor arcana has its own color-coded system.

Red is used to represent the physical, green is used for emotions, indigo for mental and violet represents spirit.

If you are used to reading Tarot cards, the Psychic Tarot Oracle deck is a really intuitive deck to transition to oracle cards with. The cards and their meanings are still pretty similar to traditional Tarot decks, with new additions.

The Psychic Tarot Oracle Deck comes in a sturdy cardboard box that allows you to keep your deck and guidebook in.

It is nothing special and definitely feels like there was not much thought going into the packaging. Still, it is the cards and guidebook that matter!

The colors and imagery of the Psychic Tarot Oracle Deck are nice enough, but again, I feel like they are nothing special. However, I do know that this is really down to personal preference and some people might really love the artwork and design of this deck.

Let’s talk about the guidebook that comes with the deck. It is a 169 page black and white book that feels pretty thick and full of information. Because the deck works with color, it seems a pain that the guidebook is not in color. This would have been useful, but the information is still all there.

The guidebook contains information and keywords about each card in the deck, which are easy to understand and useful for beginners. It also discusses the Chakra cards and how to use them.

At the beginning of the guidebook, there is useful information on card spreads, which I always think is good to include!

The cards in the Psychic Tarot Oracle Deck all follow a similar visual theme, using realistic drawings and primary and secondary colors. For me, the artwork isn’t that impressive, but I know that this is down to taste.

Each card follows the themes of traditional Tarot cards, but with different names. They also have the keywords and meanings written at the bottom of the cards, which is really helpful if you are completely new to Tarot reading.

Chakra cards are meant to read Chakras. As a matter of preference, this group of cards could be easily removed from the reading without affecting the importance of delivered information. However, if you do work with the Chakra system, these cards will expand your reading by telling which Chakra requires attention.

The cards are quite big compared to other Tarot and Oracle decks. They are pretty wide with a semi-gloss finish. This is something to consider if you are wishing to purchase the deck. The geometrical design on the backs of the cards is pretty nice, and I think the gilding adds a nice touch.

Let’s look at some specific cards of The Psychic Tarot Oracle Deck and changes John Holland has made to the traditional Tarot.

The Fool card is renamed New Beginnings. Unlike Tarot’s classic image of a young man setting up on a journey, we see a woman who is not quite young but determined to make that first step from her dwelling into the world. She looks prepared to face any challenges and obstacles on her way.

I quite like this depiction on the card and the changes to the first card of the major arcana. The card reminds us that no matter how old we are, it’s never too late to start something new. We begin new journeys every day of our lives, and there is opportunity all around us.

In the Psychic Tarot Oracle deck, the Death card becomes Transformation. For people used to Tarot, we know that this is what the Death card is all about. When appearing in a reading, it signifies the death of one phase in your life and the start of another.

The person on the Transformation card appears to be a fairy with wings spread wide open. She is transitioning from one state to another, ending her previous way of living and embracing her new self. I think it’s a beautiful re-imagining of a Death card, filling it with clarity and gentleness.

The World card is renamed The Universe. I think that this might be my favorite card of the deck, as it contains really beautiful imagery.

Here we see the Cosmic Consciousness in the form of a human face. The same picture is actually on the box itself and the guidebook, reminding us that we are a part of the universe and are able to use our psychic abilities to connect with souls and spirits throughout conscious realms.

What Do You Think of the Psychic Tarot Oracle Deck?

The Psychic Tarot Oracle Deck is a pretty nice reimaging of traditional Tarot. I like how the cards all have their meaning written on them, making them easy to use without needing to consult the guidebook. 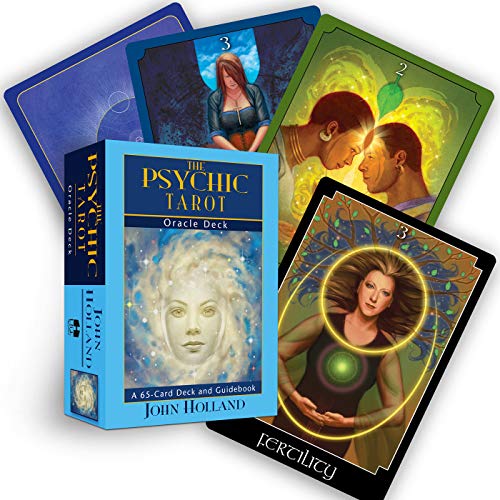 However, this deck isn’t that impressive. It is fine, and I think some people might love it and get loads from it. Personally, it just isn’t for me. What do you think about the Psychic Tarot Oracle Deck?

All reviews posted on this blog are the honest opinions of the author and contain no promotional material, unless stated otherwise.