The final card in this suit, the King of Wands, exudes a natural authority. Like the Queen of Wands, his Majesty is full of creative energy.

A mastermind of new strategies, he uses self-expression to get what he desires. But it isn’t just creation that the King of Wands is focused on; it is the implementation of his plan.

Remember, Court Cards like Kings and Queens don’t deliver messages (like the Pages). Instead, they represent you or a person in your life. So when you are trying to determine why the King of Wands has appeared in your Tarot reading, look at his personality traits.

The surrounding cards are important, as well. For more about these, check out the card combination examples at the bottom.

Before diving deeper into the upright- and reversed King of Wands card meaning, and its connection to love, work, and life, first a quick overview of the most important words connected to this Court card.

To fully understand the King of Wands tarot card meaning, we will first take a look at the illustration, colors, and symbolism of this male court card.

The cover of the King of Wands Tarot card shows a royal on his throne. The throne itself and the cape that he wears are decorated with two important symbols: the lion and the salamander.

His better half, the Queen of Wands is embellished with the same designs, showing the strength and fiery passion of their empire. His bright orange robe is a manifestation of the same energy.

In the King’s hand is a blossoming wand. This represents the creativity that surrounds him. He isn’t looking straight ahead, but off into the future which signifies two important things connected with this card: growth and momentum.

Although he might not be surrounded by money like the King of Pentacles, the salamander at his feet symbolizes a powerful omen. The King of Wands is full of fire and will do whatever it takes to overcome any obstacles that stand in his way.

The King of Wands dominates his environment and earns respect as well as willing compliance. When he appears in the Upright position, he represents real power over any situation.

This is an excellent sign if you are facing a problem that seems unsolvable. The personality of the King of Wands suggests the answer you seek will be found only when you embrace your personal power and a sense of boldness.

Are you willing to take chances when the stakes are high? If not, now is the time to take on a new attitude. Not every card in the Minor Arcana suggests going out on a limb when it comes to financial ventures, but this one does.

When he is representing someone else, the King of Wands symbolizes a man in your life who is both supportive and protective of you.

If you are the one being represented by this royalty card, it may be time to make a move. However, this doesn’t have to be physical in nature. If you have been thinking about making a big purchase, going for a promotion, or investing your money into something you believe in—do it.

Once you’ve weighed all your options, don’t waste too much time questioning your decision. The King of Wands isn’t one to second guess himself. One part of living with purpose is doing what you feel in your gut and letting the chips fall where they may.

If you are looking for love or hoping you’ve found the one, the King of Wands is a great omen. He represents a man who is not afraid to share feelings but can also protect and provide. Although focused on work, he is able to balance and guard the hearts of those he loves fiercely.

If you’re that man, embrace the qualities of the King and go after the woman that you want. If you are a woman, prepare to feel the fiery passion that we all desire from our partner.

The only warning from the King of Wands in love is to make sure that communication, trust, and respect are also placed in a position of value. Although butterflies and a racing heart can be fun for a while, it takes real work to make a commitment stick.

Rest and recuperation are needed from both a physical and mental standpoint. The King of Wands represents vitality, but we are not machines. If you are pushing yourself too hard at work or working overtime to meet everyone’s needs, take a breather.

Newfound health goals are great, but you don’t want to push yourself toward injury or exhaustion. This card suggests you should find creative solutions that will allow you to meet all of your goals without adding more to your already heavy plate.

As with the Queen of Wands and other Court cards, the ‘reversed’ representation of this Minor Arcana card represents the negative aspects of her personality.

What are the negative aspects of this card? Arrogance and an impulsive, selfish nature. The King of Wands Reversed wants what he wants and doesn’t stop until he gets it.

This is great unless you’re in his warpath. Sometimes we (and those around us) are so driven to reach a goal that we fail to see what is at stake.

Are you not spending enough time with your spouse or kids? Have you been so focused on what you want that you’re not considering the needs of others? Perhaps you’re the one who has been feeling shut out by someone with king-like qualities.

This card often represents workaholic partners when reversed, and those who let irritation and impulsivity get the best of them. It is okay to be a ‘man on a mission,’ but when we begin to hurt others in the process, we must reevaluate what is most valuable in our lives.

King of Wands: Yes or No

Go full steam ahead! Yes–is the answer given by the King of wands when pulled in a ‘yes or no’ reading. However, if he appears reversed, you should make sure that what you are wanting isn’t going to affect others negatively and proceed with caution.

King of Wands and Astrology

The King of Wands is linked to all fire signs. Aries, Leo, and Sagittarius are all reflected in this card. These zodiac signs are defined by being passionate, outgoing, and inspiring. They are often intense individuals, with a sense of adventure and ambition.

Below you’ll find the most important card combinations of the King of Wands with other cards, as you might get them in your next spread.

King of Wands and the Magician

Business is about to boom! When these two men pair up, an idea or project you’re working on is going to sprout like magic and lead to instant success.

Do you want to start your own business or patent an idea? Do so quickly. Don’t sleep on whatever it is you desire. Go after your dream with gusto instead.

King of Wands and the Sun

There are two meanings often seen with this combination with the Sun and both revolve around parenthood. Either you will be dealing with your own issues regarding your children or a situation will soon arise with your parents.

Neither one of these scenarios is necessarily a bad thing. Much of your time and attention will be pulled away from other things, though. This may mean making family a priority over your work and other areas.

King of Wands and the High Priestess

The High Priestess represents a close friend who has much-needed advice for you when she is paired with the King of Wands. Sometimes it is hard to see the solution to our own problems because we are so emotionally involved.

When this is the case, some of us tend to withdraw and feel like no one else can understand what we are going through. This isn’t true, though. You don’t have to tell everyone your ‘business,’ but finding one good friend to rely on for support is essential.

King of Wands and any Other Court Card

This means added success! Together on his own, the King is already a winner. When connected with other kings, queens, knights, or pages, he is transformational! Whether the King of Wands falls with others or alone, he represents a re-creation of reality.

One of the most powerful things about our universe is that it allows us to shape our lives as we wish. Your present doesn’t have to be yours forever. The King of Wands is asking this question, “What would you change if you knew you wouldn’t fail?”

King of Wands in a Reading

That’s all for the King of Wands tarot card meaning! Can’t get enough? Learn how to read tarot in this Tarot Beginners Guide.

If you have pulled the King of Wands tarot card in your spread, did the meaning make sense to your situation in life? 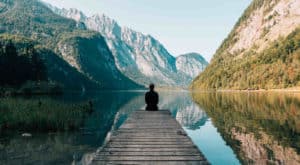