The Ace and Two of Pentacles focused on accomplishing things alone. The Three of Pentacles reminds us that there is a particular strength in a shared vision.

John C. Maxwell says that “teamwork makes dream work” and the three men featured in the Three of Pentacles would agree with that.

If this card has presented itself as part of your spread, be ready to embrace your inner circle and work together to make the most of what is on the horizon.

Before we dive deeper into the upright- and reversed meaning of the Three of Pentacles, we wrote down the most important words represented by this Minor Arcana card.

To fully understand the Three of Pentacles tarot card meaning, we will first take a look at the illustration, its colors, and its symbolism.

The number three is considered a holy number by many religions. Three is also the number of completion. The collaboration between the trio shown on the Three of Pentacles embodies these symbols.

The archway in the center of the scene includes three disk-shaped pentacles that are linked. These emblems embody the meaning of the Three of Pentacles and represent integration and partnership.

The card depicts a young apprentice working on a cathedral. Standing on a bench, he looks back at the two men, a priest, and a nobleman, guiding him. Some tarot decks show them holding plans, characterizing these men as architects of the building.

Regardless of their roles, the elders and the stonemason are an obvious team. At the moment the duo is listening to the stonemason. It looks like he is discussing his progress, and even though he is less experienced, the body language of the two-man shows us that they value his opinion and specialist expertise.

Working on projects with others, being an essential part of a team, and bringing things to completion is key to a fulfilling life. I’m sure our stonemason and the two elder would agree.

If you are familiar with pentacles, then you already know that this suit is usually associated with security and growth in many different areas. Because the pentacles look like coins and are often illustrated this way in tarot sets, we often assume they are always associated with finances.

Yet, the upright Three of Pentacles is less about money and more about mastery. It represents studying and apprenticeship and is an encouragement that you are on the right track. You are competent at what you do, and you are making progress.

However, just like the Stoneman and the architects couldn’t build the cathedral on their own, the Three of Pentacles card can also be a sign to collaborate with others.

It teaches you not to ignore the talents of the others that surround you and to create synergies to accomplish even greater results.

When it comes to the Three of Pentacles, ‘r’ words abound. If you have drawn this card in a tarot reading, reward and recognition are on the horizon. However, this is only true if you are willing to put in the hard work.

After all, the apprentice showcased in the cards is not standing on the sidelines watching. He is focused on the task at hand, as are the others in the cathedral.

If the Three of Pentacles has presented itself to you, now is the time to jump into a new project or financial venture. This could be a business idea, a possible promotion, going back to school, or something else you are passionate about.

Just keep in mind that this is not something to tackle in solitude. Collaborating with others will be both expected and needed.

The collective spirit of the Three of Pentacles makes it a welcome card for love and relationship readings. In general, it represents love and acceptance from those around you. Friendships, family connections, and romantic relationships will flourish under the pentacle trio’s guidance.

Perhaps you are single and looking for that special someone. The Three of Pentacles suggests seeking help from others such as a trusted friend or even a matchmaker. Once you have a guide of sorts, a new partner is likely to come forward.

By the same token, if you are already in a relationship, the outlook is a good one. If you focus on laying a solid foundation of trust, respect, and communication, your union will flourish.

When it comes to health and spirituality, the Three of Pentacles Tarot card tells you that all of your hard work and determination will be starting to pay off and the results will soon be visible. Just don’t give up!

Additionally, if you are in need of healing or improvement when it comes to specific issues or overall wellness, now is the time for action. Whether it is spiritual or physical, you shouldn’t deal with it on your own.

Collaborating with another person (i.e., a doctor, therapist, personal trainer, or religious leader) is key. Doing so will allow this pentacle’s essence of collaboration to lead to increased motivation and results.

In this paragraph, we will talk a bit more about what it means if you’ve pulled the Three of Pentacles tarot card in the reversed position.

When reversed, the Three of Pentacles represents the undesirable effects of lack of focus and collaboration. It often presents itself, not in a judgmental way, but as a reminder that the African proverb “it takes a village” holds true.

For the most part, people consider the words that represent this reversal to be unfavorable. After all, phrases like lack of collaboration, no motivation, few goals, not learning from mistakes, and little growth aren’t exactly positive.

But you shouldn’t think of the Three of Pentacles’ message as a character attack. Instead, consider it as a bit of guidance to show you what might be holding you back.

Have you been struggling with a specific relationship or friendship? Do issues with coworkers abound? Surprisingly, now might be the time to reconcile.

Instead of focusing on the negative, honing in on realigning goals, strengthening relationships, and working on communication are much needed. However, it is not out of your reach.

All things considered, sitting down and taking a personal inventory of every area of your life where more collaboration and motivation are needed is the first step. By doing so, you can rid yourself of the reversed Three of Pentacles warning.

There is much opportunity for growth, opportunity, and recognition within your reach if you are willing to commit.

Three of Pentacles: Yes or No

The Three of Pentacles in a Yes or No reading is a card of ‘yesses’ especially when it comes to career and education.

Have you been thinking about going to school to learn a trade? Are you looking for a mentor to help you go to the next level? Is there a different career path you’ve been considering? If so, now is them.

Three of Pentacles and Astrology

When you look at the Three of Pentacles in most decks, you will see three figures assembled in what appears to be a workshop, associating this card with expanding skills or gaining recognition in a trade.

This could easily fit the bill for any of the Earth Signs, so go with your gut instinct. However, some will look at the solid pillars portrayed in some versions of this card and associate this detailed craftsmanship with Capricorn.

Capricorn is diligent, hardworking, and can persevere in even the most tedious of work settings. This sign is also associated with structures, foundations, and frameworks.

The Three of Pentacles is all about teamwork, focused effort, and growth and learning. Depending on the surrounding cards, this may be in the field of love, work, or travel. Below you can find the most important card combinations of the Three of Pentacles.

Three of Pentacles and Temperance

The Three of Pentacles is all about getting the job done. The day has come when you must join forces with someone else for the greater good. Is there a big project that you’ve been hoping to accomplish but can’t seem to complete? Is there some goal you’ve always dreamed of but aren’t sure where to begin?

Temperance suggests finding a balance with someone else who can become your ‘partner in crime’.

Three of Pentacles and the Lovers

Are you seeking a new romance? If so, you won’t need to look very far. When matched with the Lovers card, the Three of Pentacles suggests your mate is at your workplace. Although most people frown upon mixing business with pleasure, it might not be such a bad idea.

Three of Pentacles and the World

Are you ready to travel? This card combination says it is time–with a twist. When the World and the Three of Pentacles unite a job overseas is something to consider. Are there opportunities in your field or perhaps a different one that would allow you to shine in a new place? If so, it might be time to take a leap of faith.

Three of Pentacles and the Three of Wands

If you don’t have future plans in motion, what are you waiting for? When these threes fall in the same reading, they have a clear message: stop thinking about the past and prepare for what is yet to come.

Three of Pentacles and the Eight of Swords

Do you need a boost of inspiration? The Three of Pentacles and the Eight of Swords suggest that your confidence is running low. Perhaps you lack direction or simply don’t feel up to the job. Since the Three of Pentacles is the card of cooperation, look for a mentor who can help you through this tough time.

Three of Pentacles in other decks

You probably already have noticed that I write all my descriptions based on the Rider-Waite Tarot deck. This doesn’t mean that I use other decks too. And there are so many beautiful decks out there! Below you find a small selection of beautiful Three of Pentacles cards.

Three of Pentacles in a Reading

That’s all for the Three of Pentacles tarot card meaning! If you have pulled this card in your reading, did the meaning make sense to your situation in life?

I love to hear about spot-on readings so please take a minute to let me know in the comments below!

Are you a Tarot beginner? Learn how to read the tarot in this Tarot Beginners Guide. 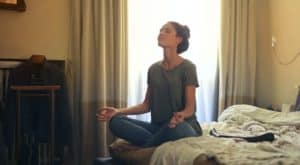 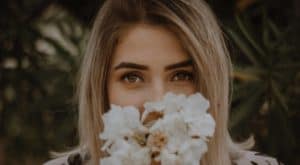 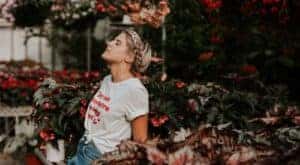 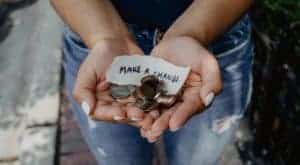